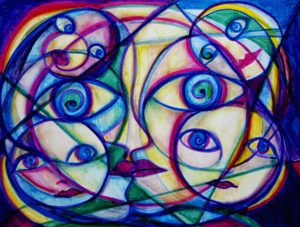 There was once a princess named Dim who had gorgeous eyes.  Even though she pretended that her eyes were naturally beautiful, everyone knew that she had had numerous cosmetic surgeries done on them.  She had had her eyelids tucked, the area under her eyes nipped, her eyes widened, and, most importantly (to our story), she had had a special lens inserted that made it possible for her to see in the dark.  She won many accolades because of her beautiful eyes.  Once, even the internet broke because she decided to post a selfie of her naked (without make-up) eyes.
Princess Dim liked to challenge young men to a game of chess.  The stakes were:  Winner takes all of the loser’s money.  The young men were entranced by her eyes and (of course) by her money, too.  So, many a young man staked everything and lost everything, making the princess richer and richer.  This gave the princess more money to do more cosmetic surgeries and she lived happily. (Are you wondering if this is possible?) Anyway, so it seemed, in her world of extreme makeovers.
One day a half wise young man named Sage challenged Princess Dim to a chess game.  As were the conditions of the game, they played at night, by the light of a candle.  Sage was very good at chess and so a good game went on for awhile.  But, as luck would have it, he started feeling sleepy and once or twice he nodded off.  Unbeknownst to Sage, the princess had a wily cat named Maya as her friend and ally.  Every time Sage nodded off, the cat would extinguish the candle and Princess Dim would move the pieces around to her advantage.  And so it came to pass that Sage went back home that morning bankrupt.
Remember, I mentioned Sage was half wise.  He was wise on two counts:
1. He had compassion for himself.  He knew he shouldn’t be too hard on himself but also that he should do something different so he could win his money back.
2. He acknowledged to himself that to win he would require a special skill.  He didn’t know what, but he knew there was something more to Princess Dim’s eyes than meets the eye.  After deep thought, he realized he needed his third eye opened.
He googled and found the best third eye surgeon in the world.  Her name was Dr. Athena.  He approached Dr. Athena, thinking he will put his eye surgery on his credit card.  But, fortunately or unfortunately, the fees the surgeon wanted were a different currency than was familiar to Sage.  She said to Sage, “If you do the following for twenty-one days straight, I will perform the surgery on you.”
1. Every day, ask yourself, “What sense gratification am I willing to give up for my spiritual freedom.”  The first answer that comes to your mind, give that up that day.  For example, one day, if the thought comes: spending hours watching Youtube videos, then, that day you don’t watch Youtube videos.
2. Don’t keep over-analyzing as to “What happened? Why did it happen?” Instead, remember, “Whatever happened is good.”
3. Leave the past in the past and don’t keep bringing it into the present.
Sage, did all of the above diligently and arrived the day of the surgery all prepared.  Much to his surprise, the surgery went a little differently than he imagined.
Dr. Athena made him do a series of mental exercises:
Fix your awareness on your real identity.  You are a non-material being of conscient energy that animates that body.  Keep repeating to yourself, “I’m a spiritual being and this body is my vehicle for this human experience.”
Make a firm promise to yourself: “I, the soul, will henceforth control the body and not let the physical senses control the soul.”
Guess how many days, it took for the surgery to be completed?  Yep, you are right:  twenty-one days.  After twenty-one days, what did Sage see?
His third eye provided a perception beyond ordinary sight.  It sensed wisdom and brought his inner and outer lives into balance.
As the days went on, he realized all the benefits of his surgery slowly, one by one:
* He came to know his true, original self.  He felt that he went from being blind to having sight.
* He was able to see beyond the obvious into deep spiritual wisdom.
* When he was in the awareness of being the one with the third eye, he was able to see the past, the present, and the future equally clearly.  This awareness gave him spiritual power.
* He came to know time and his purpose.
Before he fulfilled his larger purpose, he knew he had to go win his money back.  This time, armed with a different set of tools, Sage challenged Princess Dim to a chess game.  Of course during the game, Princess Dim tried her tricks, but Sage was able to clearly see reality; he was able to keep Maya, the cat, away from the light of the candle.  He won the game, of course.
What he wasn’t sure of, was whether he should take all of Princess Dim’s money or let her keep some.  What do you think?  Write your comments below.